The guys recap the Diamond Club Party at SXSW, Problem Solvers makes its Night Attack debut and they talk about their encounter with Alex Jones.

Veronica was supposed to be on the show, but her hand was eaten by an alligator. Interestingly enough, everything was fine until she drank Ruinum at SXSW. 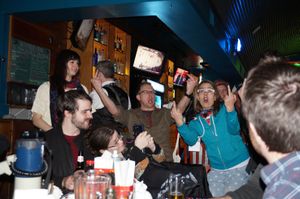 Brian and Justin recap the awesome Diamond Club Party at SXSW. Spoiler alert! The Possum Posse and Tay Allyn were awesome. One of the highlights of the party was when the guys forced The Possum Posse to play "Critter Camp".

Current Patron total - $1915.63 from 1136 patrons. If you want to become a patron, head over to Patreon.com/NightAttack

This is the Night Attack debut of Pr0blem Solverz! The plan is to have Sarah Lane come on the show once a month or so to solve your problems. Check out all the submissions here

Mailroute is a watchful protector against "that which must not be named". They have a contest where they will award a new 16 GB iPod Nano to the person who tweets the best/most creative/fucked up tweet using the hashtag "MaximumNoSpam".

And you can also go to Mailroute.net/NightAttack for a free trial and 10% off your account.

The guys tell the story of how they met Alex Jones when they took Penny to 'Blazer Tag' for her 10th birthday. Fun fact: Alex Jones liked Justin's San Francisco Federation shirt.

This is the time where Justin and Brian

Since Night Attack is directly funded by the viewers, the preshow and aftershow videos are available to Patrons of the show ASAP and freely available 48h after release. If you're not yet a Patron of the show, then go to http://www.patreon.com/nightattack and pledge ANY amount!