Difference between revisions of "DIAF" 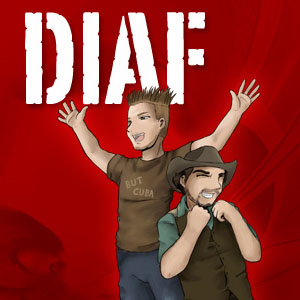 DIAF is a series of audiobooks presented in podcast format. Written by members of Chat Realm, DIAF stories follow the adventures of Brian Brushwood and Justin Robert Young.

The DIAF series was originally conceived and written by Josh Hilp, but Brian has called for contributions from all fans who are interested in writing a series of five chapters at a time.

Each audiobook begins with either Brian or Justin opening up the chapter stating their names and the author of the chapter. They then proceed to read the chapter word-for-word in various voices and accents. Sometimes Justin mispronounces words. For example, he may say microwave instead of microphone or slut instead of shut.

Late on December 28, 2010, Brian announced that he would record a chapter every night, for the rest of his life, if they are available.

The named characters of the story (in order of appearance) are: