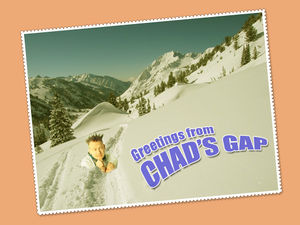 Chad's Gap was first referenced in Episode 6 of BBLiveShow. Someone named "Timbo" called in and asked Brian and Mike how to get to Chad's Gap from the bottom of Alta. He also claimed to have a friend, Tanner, who "hit it" and broke his ankles.