Difference between revisions of "Diamond Club"

For the best-selling novel, refer to The Diamond Group: A Novel

Diamond Group is beyond chatrealm. It is the highest level of fandom that can be achieved by a fan of NSFW other than actually being a guest on the show.

The idea of a "Diamond Membership" was first conceived in late October 2010. It was proposed in jest as a special level of NSFW fandom. For an undisclosed price, fans would be able to purchase a Diamond Membership and listen in to all the pre- and post-NSFW show calls between Brian Brushwood and Justin Robert Young.

During the aftershow on December 15th, there were further talks about the Diamond Membership. Justin proposed that when Brian and Justin are talking on the phone, they would hit record every now and then and these recordings would be released for the Diamond Members.

In September, during the episode El Celsior, Brian and Justin promoted the first of these recordings, Night Attack, which was subsequently released the next day on Amazon and CDBaby for $1.99. It eventually reached the front page of CDBaby.com, #1 on the Amazon Comedy MP3 charts, and #5 on the Amazon overall MP3 Charts.

In December 2010, the secret society began to be referred to as "Diamond Group". By February 2011, this term began to be used to refer to people watching the Justin.tv broadcasts of Brian and/or Justin. In chat, people would refer to it as <>.

To make the hand sign, make a "V" sign with your index and middle fingers, rotate one hand 180°, and touch fingertips to form a diamond shape. Having both hands face in the same direction or using the wrong fingers is not a valid <> hand sign and is subject to ridicule.

To become a member:

If you can manage to take a photo of yourself while both hands are in frame, you are obviously elite enough to be in the Diamond Group! 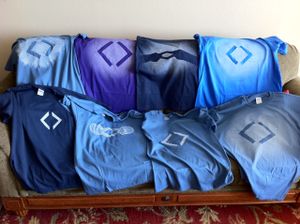 Patrick Delahanty made 10 Diamond Group T-shirts which were distributed at SXSW 2011. Shortly after SXSW, he planned to open up orders to Diamond Group Members and sell more shirts at cost (or very close to it)...but never had time. (Hey, remember that Afterlyfe.me project? That too.)

Brian and Justin made shirts available during Dragon*Con: Con of a Dragon 2: Double Complete Dragon. They sold the leftover shirts during Episode 94 at shop.nsfwshow.com but they had sold out by the end of the episode.

In the summer of 2012, Chatrealm wrote a sexy novel meant to take on Fifty Shades of Grey titled The Diamond Group: A Novel. In the book, most of the events are centered around a nightclub known as "The Diamond Group".

Diamond Core is a subset of Diamond Group which consists of people behind the scenes at TWiT who aid in getting the show out to the masses.