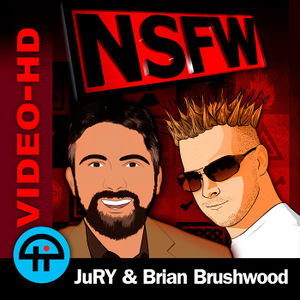 NSFW the evolution of BBLiveShow into (an attempt at) a professional show. NSFW is part of the TWiT Netcast Network and hosted by Brian Brushwood and Justin Robert Young. It premiered on November 24, 2009 with guests Leo Laporte and Alex Albrecht playing Name That Autocomplete. It ended on February 24, 2014 and was succeeded by Night Attack.

Each episode begins with a viral video (sometimes suggested by the chat room, others chosen by Brian or Justin in advance). Usually they play two or three quick games with their guest that take up about half of the show, before getting on with the main event which takes up the second half. Recordings are made of each episode and are available as a podcast (or "netcast" as Leo says). Like the BBLiveShow before it, the "after show" that follows the live broadcast is not included in the podcast.

The "NSFW" name itself does not always literally mean "Not Safe For Work". When introducing the show, Brian interprets the acronym as the "New Show Full of Win" and "New Sauce For the Webernets." Others include:

Fans of the show were dubbed "Dolphin Fuckers" by King Leo during a TWiT recording on April 11, 2010 as a reference to the dolphin puppet incident.

The term chat realm was made popular to refer to the chat room during The Scream Queens vs. Zombie President.

The theme music for NSFW is "Vicario" by Kissinger. The actual song has lyrics, but a special edit is used during NSFW which eliminates the parts of the song with lyrics.

Brian had the option of having one of the composers who do themes for TWiT do one for NSFW but it didn't work out, so he negotiated usage of Vicario and paid the band with the first $200 that came from the TWiT paychecks. video source

On December 9, 2010, NSFW was selected as one of the iTunes Best of 2010 for podcasts. (They listed it under audio...which means the video version must have been too much to handle!)

NSFW was the only TWiT show that primarily handled its switching locally (via Brian on Vidblaster and later Wirecast). Other remotely-produced TWiT shows' participants connect to and handle production through the TWiT Brickhouse. Brian does all the production and video switching from his home and TWiT essentially serves as a receiver to record and edit the audio/video for release to podcast. Though TWiT captured the show, Brian also recorded locally to provide better video quality and in case of all-too-frequent technical failures.

Occasionally, like if Brian and/or Justin were at the Brickhouse, participants connected to TWiT as with any of their other podcasts, and the engineer on board (initially Colleen Kelly, more recently John Slanina, and occasionally Jason Howell or OMG Chad) will handle the production. A different set of "lower third" graphics were used (from the TWiT TriCaster) as opposed to the usual NSFW bug that appears in the lower left-hand corner when Brian is producing from home.

During its run, NSFW was rarely rerun on the TWiT live stream due to the more late-night nature of the show. Notable exceptions have been The NSFW Christmas Spectacular, Dragon Con episodes during NSFW's regular time slot, a couple Summer Music Series episodes, and the first episode after the 200th episode.

Brian, Justin, Leo, and others at TWiT suspect that the "NSFW" name is making some potential fans avoid the show. Those people may be expecting truly Not Safe For Work content while the show is actually quite "PG" and tame. This has prompted discussions about renaming the show starting in the summer of 2010 with fans lobbying for names like "Night Attack" and "This Podcast Is Awesome" among many others.

In October 2010, it was announced that a new name had been selected. However, the name as well as the method of introduction has yet to be determined.

On June 1, 2011, in response to being asked about the name change, Justin tweeted that he and Brian were "NSFWshow till we D-I-E".

For most of NSFW's existence there have been rumors of Leo taking the show off the air, mostly due to the show's mostly non-tech related and outrageous content as well as its relatively low download numbers. Also, there are a number of TWiT purists who are offended at any non-tech programming on the network and seem to have focused a lot of their anger on NSFW. A lot of these people seem to think that Leo has no idea that the show is on his network and actually comment, "Leo would never allow this!"

Many times between shows on TWiT, Leo will talk to the chat room and he has said multiple times that despite the low download numbers, he will never cancel NSFW. The show also brings in a large number of new audience members who may then discover TWiT's other programming. In fact, Leo has stated that he would love to have Brian move to Petaluma to be more involved with the shows at TWiT, as well as doing NSFW live from the studios every week.

In the Chatrealm, there is a running joke that whenever something particularly outrageous or controversial happens during NSFW, people say "[x] Cancelled" in the chat, which references checking off NSFW Bingo squares. Brian has since asked that this joke be retired to stop spreading rumors that the show will actually be cancelled. This has made some people begin saying "[x] Promoted".

Brian has also mentioned that if NSFW ever does get cancelled for whatever reason, they will immediately revert back to doing the BBLiveShow the very next week. So worry not, Bri Bri and Jurbs will be streaming for a long time to come.

On February 14th, 2014 during Justin's appearance on Current Geek, Scott Johnson accidentally let it slip that NSFW would be ending.[1] When Scott was a guest on NSFW four days later, it was announced that the next episode would be their last. With all of the rumors of cancellation throughout the previous 4+ years, both TWiT and Brian and Justin wanted to make it absolutely clear that they were not cancelled. Brian and Justin wanted to get a little more raunchy and outrageous, and that just wasn't possible to do while keeping the sponsors happy and maintaining TWiT's desired reputation as "The CNN of Tech".

In the end, NSFW was never cancelled. It left TWiT on its own for greener (as in money) pastures and morphed into Night Attack eight days later.

In the wee-morning hours of October 9th, 2014 it was discovered that the NSFW YouTube channel as well as all episodes and mentions of the NSFW show on the TWiT website were deleted[2]. This was a product of Brian and Justin's falling out with the TWiT network (see Brian and Justin's explanation of the falling out). Chatrealm banded together to compile a list of archived NSFW episodes. Within 24 hours the 480p version of every episode was tracked down, within a couple days all the HD episodes were found and every episode was uploaded to YouTube on the Chatrealm-controlled NSFW Show Backup channel.

As TWiT is no longer hosting NSFW episodes, podcast feeds are not being made available.

The archive of all episodes may be downloaded using BitTorrent. Three different torrents are available:

BitTorrent clients can also be used to download specific files out of a torrent (instead of downloading everything), so it is possible to use BitTorrent to download individual episodes.

For direct downloads, there are archive.org pages for 480p video (in MP4 and OGG form) and audio (in MP3 and OGG form). For individual direct-downloads of 720p video (starting with episode 132), links are available in each episode's wiki page.