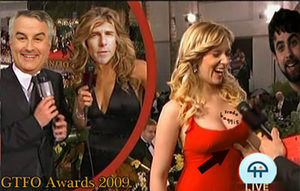 The GTFO Awards are prestigious awards which have been around since either 1859, 1 BC, or 2 BC. The awards are presented to things, people, persons, ideas, memes whose time has come and need to be told to "GTFO".

In 2009, the nomination period was open via Twitter for 48 hours prior to the awards presentation using the hashtag #GTFOawards. The first online presentation of the awards took place on the December 29, 2009, during NSFW's sixth episode, "The GTFO Awards".

"As long as there have been people getting told to get the F-word out of places, the GTFO Awards have existed, if even in our hearts." -Justin Robert Young