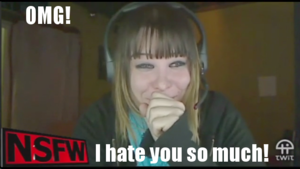 Colleen Kelly was the Vice President of Engineering at TWiT and was the first board operator for NSFW (JammerB soon took over this role).

She announced via twitter in April 2010 that she would be taking a job at Google. Her first NSFW guest appearance in Internet Celebrity Fight Club was from her home.