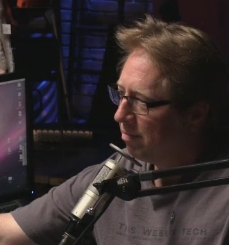 The source of the voices in Brian's head.

John Slanina ("JammerB") is a studio manager and engineer for TWiT and handled the TWiT Brickhouse-side switching for NSFW (having taken over for Colleen Kelly early on). He could sometimes be heard during the live show giving Brian and Justin prompts and other vital information; in earlier episodes his voice would usually be trimmed from the final release to podcast but as he became a more prominent figure in the show, his back chatter with the hosts has been left intact.

During studio setup for the recording of iPad Today #4, John Brodied the TWiT live stream and played some of the Zombie President submissions from NSFW #34. When the TWiT Live stream totally failed during the live show at Dragon*Con 2010, John played the chat room's favorite viral videos to save the day.

John likes to work in the dark

He was part of the Diamond Core production team (with Tony Wang, OMG Chad and Jason Howell) that the Chatrealm revered as they often stayed very late at the Brickhouse to capture and edit NSFW. Though Chad had been training to operate the Tricaster, John quickly quashed any Chatrealm speculation that Chad might succeed him as primary board operator for NSFW. After all, what John loves more than anything about his job is getting to "push buttons all day."

During the brick fundraiser campaign for the TWiT Brickhouse, John bought up several Diamond Club-related bricks to represent NSFW and the Chatrealm. Six of his bricks have "<>" and were installed in the shape of the diamond in a prominent place in the lobby. In response to John's brick purchases, Brian rallied the Chatrealm to buy at least one brick for every episode that aired between then and the move to the Brickhouse. (The Chatrealm brick buying effort later changed to represent inside jokes for Chatrealm since there could not be a brick for every episode.)

This man is really a Lakitu.