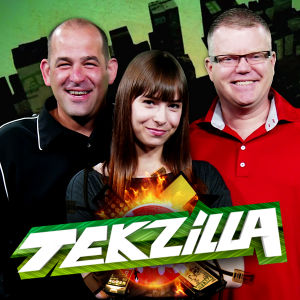 Tekzilla feeds your tech hunger! Patrick Norton and Shannon Morse bring you hands on reviews of the latest gear, tips and tricks that improve the tech you already own and conversations with the most informative experts around.

Tekzilla is a biweekly video podcast on the Revision3 network. It was currently hosted by Patrick Norton, Shannon Morse and Robert Heron with Roger Chang (who also acts as the show's producer) as a frequent guest host. Previously, Veronica Belmont was a host prior to Shannon Morse joining the show. For the first 14 episodes of Tekzilla, Patrick's co-host was Jessica Corbin who made a guest appearance on episode 16 confirming she has left Tekzilla. Tekzilla was released every Tuesday and Thursday.

The podcast premiered on Revision3 on September 28, 2007. Its final episode was November 25, 2014. It was followed by the independently produced Tekthing.