cowgirlcurtis (aka Ryan) is one of the chatrealm regulars during NSFW.

At first, it was unknown what gender Ryan was, partly due to the unisex name, and partly due to her being called a transitive on Chad Johnson's podcast. On Jan 24, 2011, it was confirmed by Bonnie that she is female.

Curtis is better known for his/her role in the controversial 2005 film Brokeback Mountain, a tale about cowboy love and why America can't seem to wrap it's collective head around why two grown men would wear those ridiculous hats and so much denim. Shortly after winning an Oswald for Best Male Lead Played By a Female Played By A Male, Curtis made the predicted next step in his/her career when he/she had a sex change in order to play The Joker in Christopher Nolan's break out hit, The Dark Knight Returns.

The world eagerly awaits to see what film Curtis will pick next, and what gender will HE/SHE choose from in order to fulfill the roll to its fullest. 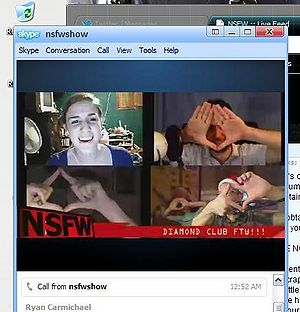