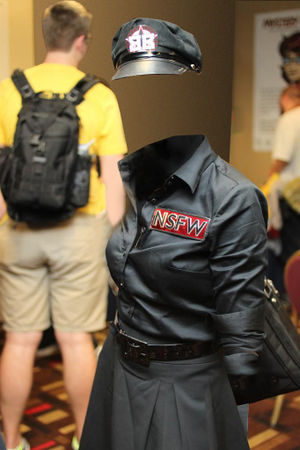 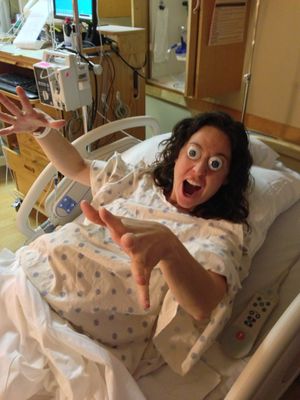 I don't know who this visible woman is, but I figured I'd just put it here.

Bonnie Brushwood (aka Bonnie the Invisible Wife) is Brian Brushwood's better half and the mother of three girls. Despite being a semi-regular caller and participant on various shows, she is rarely seen on camera. 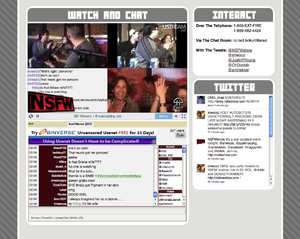 Her first known live appearance was during NSFW @ SXSW Episode 4. Footage from this was later used during SXSW Guaranteed, Guaranteed and cut off just before Bonnie enters, continuing the running gag that she never appears on the show.

Although not identified during the show, she can also be seen in Scam School during Live from Stubbs BBQ in Austin - 2010!.

Bonnie's first appearance during an episode of NSFW was in Dragon*Con: Con of a Dragon in which she can be seen sitting against the far wall and later passing in front of the audience camera. She was not identified by name. People in attendance at Dragon*Con seemed surprised that she was visible in the room during the live NSFW show. However, it may in fact have just been an elaborate costume.

Bonnie is the most frequent guest on Night Attack by far, acting as a foil to Brian and Justin's shenanigans. In recent episodes, she has been regularly shown on camera; apparently nobody ever asked her if she wanted to be on camera until late 2015. Whoops.

Bonnie has also appeared as a guest on the following podcasts:

Following the This Week in Tech recording on Sunday, March 13, 2011, the TWiT Network had no available crew to take the LiveU camera out with Brian to report on the nightlife. Brian recruited his own crew and Bonnie went from "invisible wife" to "visible producer". In her role as producer, she remained in contact with The Cottage, drove the van, found people to interview, and got the crew access to parties.