The Penalty Is Raids

The Penalty Is Raids (aka "TPIR") is the name of a Horde guild in World of Warcraft on the Nathrezim (US) server which consists mainly of fans of NSFW. It was formed on November 22, 2010 by giggleloop. The name is a reference to The Penalty Is Aids from BBLiveShow and NSFW. 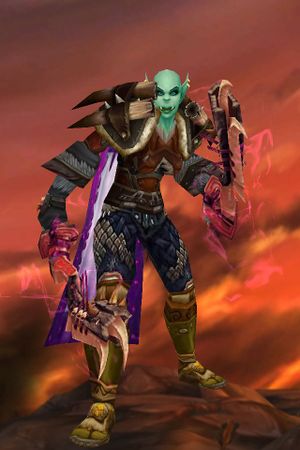 The guild ranks are as follows:

Membership is open to anyone, but especially to fans of NSFW or other BBverse shows.

To join, find Giggleloop, Horseboy, Dracaena, Eonis, or another guild member on Nathrezim. Mention "but Cuba" or some other reference to the show and we'll know you're not just some random person.

Character names which are references to the show are appreciated, but if you've got a pre-existing character you want to transfer in, they're welcome too. Please do not use other people's nicknames as character names (ie: "shwood", "ohdoctah", "amtrekker") unless you are that person.

The guild tabard was created by giggleloop and features a spider web.

As of 11/27, we now have a guild bank with 3 tabs of goodness! Everyone has access to view & deposit items, and everyone except the lowest rank (Young Wards) currently has access to remove varying amounts of items. Tabs are: Materials (for crafting), Knowledge Bank (recipes, glyphs, key learnings), and Equippables (armor, weapons, things to put on your person). It's already a bit crowded in there, so if I need to, I will purchase a 4th tab. We'll see how it goes!

evilanticz has been kind enough to set up a Vent server for use for both guilds, the info is:

Upon the release of World of Warcraft: Cataclysm on December 7, 2010, some of the guild members will be making new goblin characters.